With the release of the Purity Operating Environment 4.0 comes the new Pure Storage Volume Shadow Copy Service Provider (Pure VSS Provider). The Pure VSS Provider is a new plugin we are providing to take application consistent snapshots for Microsoft applications such as SQL Server, SharePoint and Exchange. It is important to set a foundation on the different types of backups before delving into the inner workings of the Pure VSS Provider.

Inconsistent Backup
This is probably the oldest type of backup. The process is simple, backup software starts at the beginning of a file structure and copies all of the data until it reaches the end, resulting in a backup. What can make this backup inconsistent is that if any user added/modified after a backup but before it completed that would result in an inconsistent backup; the files in the backup are not consistent. For databases these types of backups do not provide adequate protection because they only capture what is on disk. Example, with SQL Server there are a several different files, primary (MDF), log (LDF) and secondary (NDF) files and there could be I/O (transactions) that are still in memory. The inconsistent backup method only captures what is on disk and in the case of a database there may be transactions still in memory.

Application-Consistent Backup
Application-consistent backups provide the highest level of protection and consistency, it captures what is on disk and memory. For Microsoft Windows this is achieved using the Volume Shadow Copy Service (VSS) which freezes I/O, flushes everything to disk and takes a block-level snapshot of the volume. VSS is provided as a framework in the Windows operating system that performs these operations by coordinating between Requester, Writer and Provider. When a VSS request is initiated a VSS Writer (Eg. SqlServerWriter) will flush all I/O to ensure that the database is in a consistent state. Then the VSS (Hardware) Provider will take a block-level snapshot of the volume. Once this is completed the Provider notifies the Writer to resume operations.

Today the Purity Operating Environment takes crash consistent snapshots, but now with the introduction of the Pure VSS Provider we can now provide Application-Consistent Backups for Microsoft server products like SQL Server.

The Pure VSS Provider uses Diskshadow.exe as our out-of-box VSS Requester. Other requesters can be used as long as they adhere to the implementation guidelines of the VSS SDK; for example Symantec NetBackup which we have tested in our labs.

The process by which the Volume Shadow Copy Service works is illustrated below:

Steps in a VSS workflow* are as follows:

The new Pure VSS Provider can be installed from the Web Management GUI > System > Plugins > VSS. Simply download the 1.0.0 package and install on the individual Microsoft Window Server hosts. It is also possible to use other software deployment tools to install on a large volume of systems. 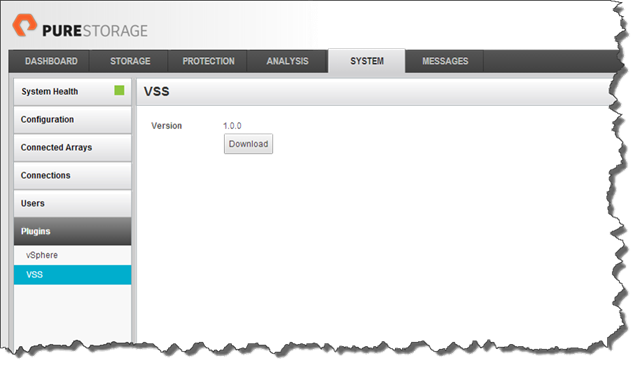 Once the Pure VSS Provider has been installed use Diskshadow.exe from an elevated Administrator prompt to ensure the provider is visible. 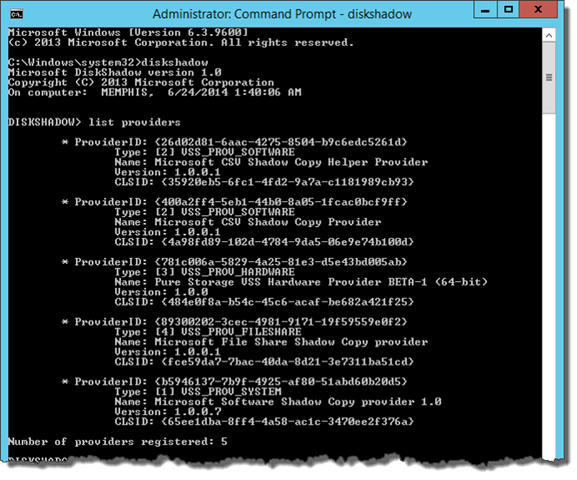 All of the commands can be run directly from Diskshadow but seeing that I have this obsession with Windows PowerShell I have created the following scripts that automates Diskshadow. 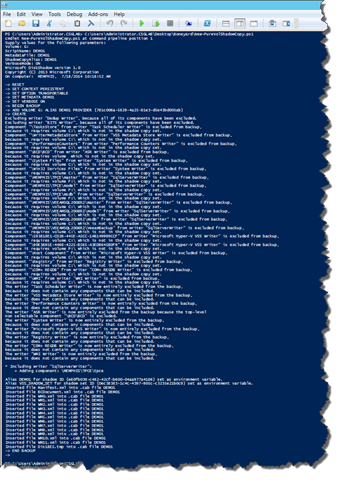 Questions or comments message me @themsftdude.

This site uses Akismet to reduce spam. Learn how your comment data is processed.

Looking to improve the resiliency of your business operations? Learn how #PureCloudBlockStore can help you implement #DisasterRecovery capabilities for #MicrosoftSQLServer in an efficient and cost-effective manner.