The next chapter in the Non-Disruptive Video Series is now available! In this chapter we focus on upgrading from a Pure Storage FlashArray FA-420 to a FlashArray//m20. Just as we showed in Chapter 1 the video illustrates all of the different cmd line operations and the physical hardware tasks to move from one generation of FlashArray to the next. The same workloads continue to run on the FlashArray that were shown in Chapter 1.

We are on Chapter 2 of the three-part video series which covers:

Each of the above tasks are performed while active workloads are running that include:

The below screenshot of the Pure Storage Web Management interface illustrates the workloads running and also shows a step in the upgrade process. You can see that there is an FA-420 and FlashArray//m chassis in the Web Management interface. This step in the process is when the new FlashArray//m chassis has been added and Controller 0 (CT0) is online (noted as FA-m20 below) and the last FA-420 controller 1 (CT1) is online (noted as FA-420 below). 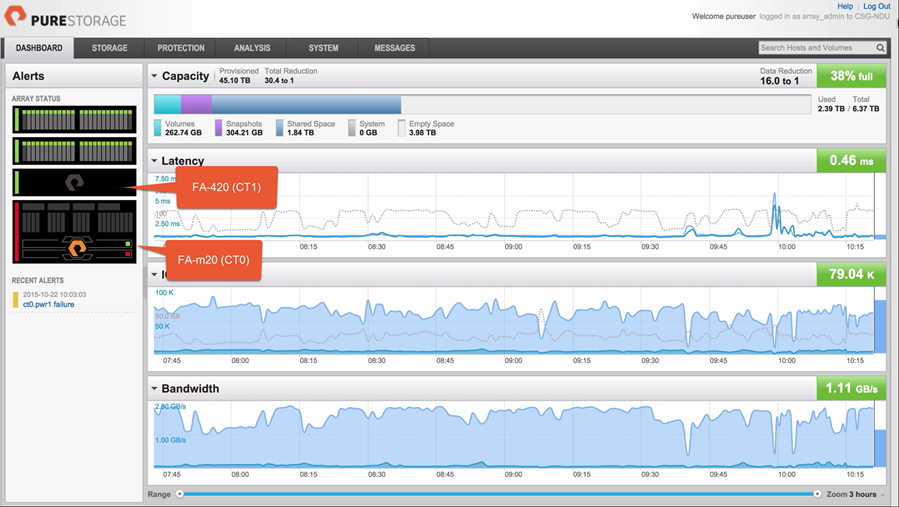 This site uses Akismet to reduce spam. Learn how your comment data is processed.

I created a solution with @AzureFunctions that automates ~20 work hours per week of 2 coworkers. Leadership response wasn’t to pay less or cut a role, but find more mindful and stimulating work for them. The solution runs for ~$30/month & I got a salary bump. I ❤️ #Serverless

SQL Server Backup and Restore for SAP on FlashArray https://purefla.sh/2zNNJdM

Being customer-first is part of our DNA at @PureStorage. It thrills & humbles us when customers validate that we're doing a good job for them. My blog on FlashArray being named a 2020 @Gartner_inc Peer Insights Customers’ Choice for Primary Storage here: https://blog.purestorage.com/gartner-peer-insights-customers-choice-primary-storage/

This is so cool to see. An SE hackathon resulting in real solutions for Pure customers. Congrats Brandon Showers! https://blog.purestorage.com/install-options-flasharray-flashblade/

Very cool! Received this wonderful package in the mail. What a great way for Pure to welcome me aboard! This is a great place to work! @PureStorage @purehealthcare #flashofpureorange